Time is passing quickly, and Christmas is just around the corner. It feels almost surreal that I am close to halfway done with my internship here in Nepal. A lot has happened since I last wrote. Though my blog posts continue to be a bit delayed, I nonetheless want to write about my experiences both for the sake of sharing, as well as for my own self-reflection.

As the days pass I realize more and more the significance of my experiences here. Though it’s not far into the past, I can say that the month of November of this year was one of the most impactful periods in my life.

My team-mate Mathilde and I travelled from Kathmandu to Dhangadhi, a city in the Far-western region of Nepal. From here we travelled to the village area, where we for the whole month of November would stay with a local family, who over the course of just one month truly became like our family. The purpose of our stay here was to teach at a local school. This school, AG English boarding school, has through 19 years especially aimed to educate underprivileged youths, many of whom live in extreme poverty.

It would be a lie to tell you that I didn’t feel a little intimidated that I for this month would hold the title of a teacher. I had little to no teaching experience, and I was just a few years older than some of the students at the school. As the first day rolled along, it turned out that my feeling of intimidation, was far from irrational. As the bell rang for first period, Mathilde and I were placed in different classrooms, without the slightest idea what subject to teach. However, the students were more than willing to help us along. It didn’t take more than a few periods before I found my “groove”. School was truly nothing but fun, which are words I think very few of us has ever put in our mouths…

Of course, there were challenges along the way also, one of the biggest being the language barrier. I knew no more than some conversational Nepali, and the students knew some, but not too much English. This resulted in the classes looking less like a lecture, and more like a game of charades, something neither I, nor the students seemed to mind.

The differences between the education philosophy in Nepal and Norway was evident from the very first day. To a large degree, in the Norwegian school, it’s not the student who has to alter him or herself to fit into the system, but rather the system that has to alter itself depending on the needs of the student. However, the opposite is the case for the Nepali educational system. Perhaps a telling example of this, is the morning routine of Nepali schools, where the students are lined up almost militaristic looking, to do a march, have prayer and sing the national anthem. 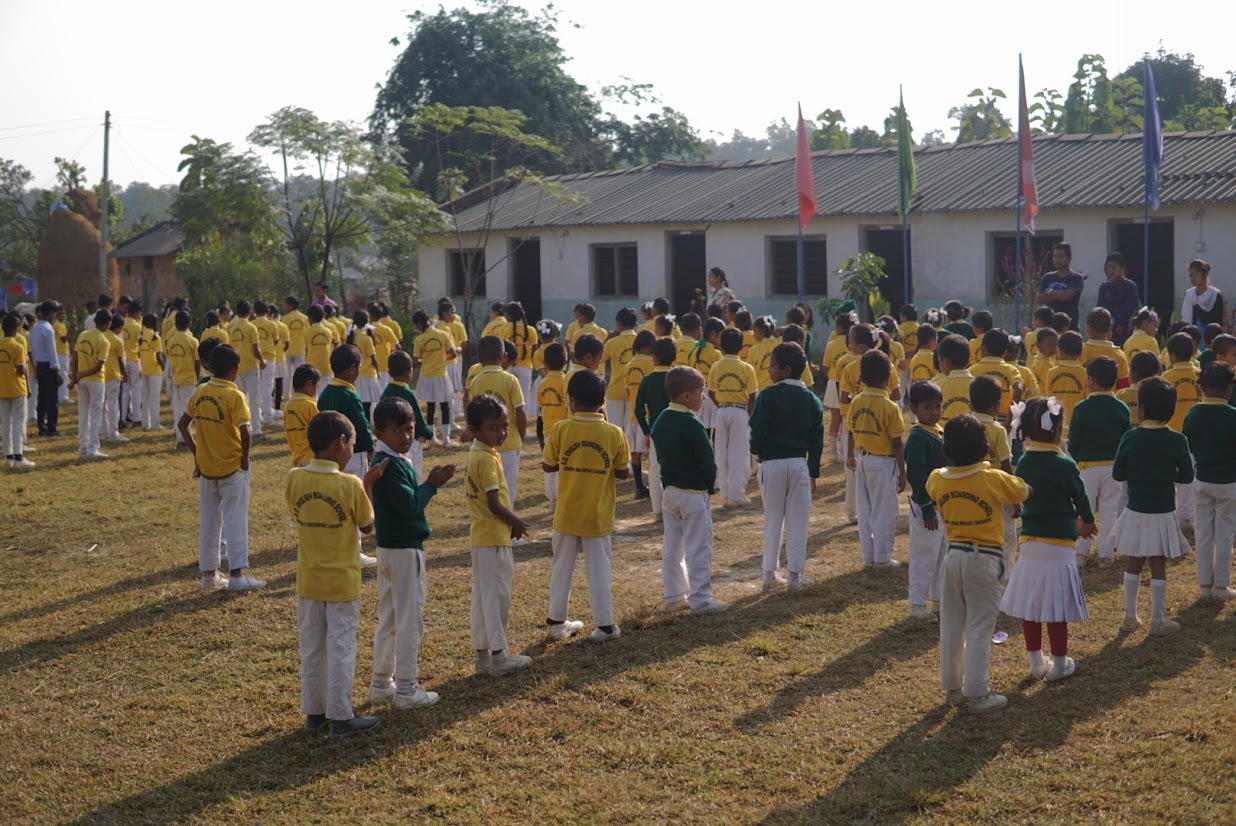 Coming from a low power distance culture, it was challenging to observe how the teachers would state their authority. Beating  children is not only a common practice in Nepali households, but also in schools. This was oftentimes difficult to witness, and I had many conversations with both teachers and students about this issue. Though we came to understand each other’s perspectives, we still stood by our own philosophy on the matter.

The students quickly picked up on the fact that I would not punish them by hitting, and they therefore felt more compelled to speak freely in class. This was good for interaction and discussion, but it also resulted in the noise level in my classes being significantly higher than in the classes of other teachers. After some time however, I found that having a five push-up “punishment” for students who were making too much of a fuss, was both a fun and quite effective solution.

We taught all kinds of subjects, varying from math, English, science, computer, health, moral and social studies. Though I felt competent to teach most of these, there were times I felt like some of the students were more qualified to teach the class than I was. I was beyond impressed by their knowledge and ability to reflect around complex issues. The role of teacher and student were in my case often completely indistinguishable.

I especially enjoyed teaching 7th class moral. This class challenged both the students and myself on our values and worldview. I remember one class in particular where we discussed the virtue of contentment. Essentially the book concluded by saying that you should be happy with what you have, an idea which I believe most of us could get behind. However, being aware of the reality of both my own life and the life of many of the students, I rightfully felt like a hypocrite while saying that you should accept and be content with what you have. I know that this is not a principal that I, nor most people of the west is able to live by. A huge aspect of our culture is centered around always chasing the newest and best. Simultaneously, I was aware of the many struggles these students and their families face. Many of them continue to live under the poverty line, without having even their basic needs covered. How could I then, with any credibility or right, conclude that you should be content with what you have. It is not the case in my own life, nor do I think contentment is a something that can be expected in many of their cases.

I might have come to AG English boarding school with the purpose of teaching. However, I am convinced that I learned more than I could ever teach away to others. Things that can’t be written on a blackboard, or that you can be examined on. I hope to take the things I learned with me, and allow them to impact my life.

Heyo, off to class we go

The school facilities were not ideal, but it had its charm

I know teachers aren’t supposed o have favorites, but…

Taking pictures seemed to be much more interesting than Social studies

Hung out with these girlies almost every day

India was just a two minute walk from our house